CAPTURING BATTLE OF ART vs. EXPLOITATION: Interview with Damon Vignale, THE EXHIBITION 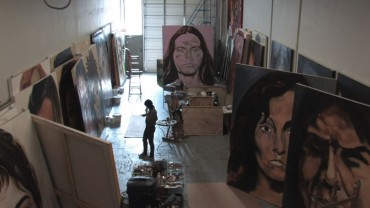 “In 2006, Pamela Masik, a contemporary artist, sets out to create a large-scale exhibition of paintings focused on women who have gone missing over the previous two decades from the streets of Vancouver. Titled The Forgotten, the series of 69 portraits will be based on a police task force poster of the missing women’s headshots ‒ a majority of them First Nations and all of them prostitutes and/or drug addicts. With her work, Masik aims to shed light on systematic violence in society against lower-income women, particularly minorities.

Then, in 2007, pig farmer Robert Pickton stands trial for the murders of 26 women whose remains have been found on his property (though he admits to an undercover officer he actually killed 49.) Those same 26 victims are among the portraits that Masik is painting.”

THE EXHIBITION follows Masik over a six year period as she struggles to exhibit “The Forgotten” and the public outcry that ensues. All of this amidst a shocking murder trial; an inquiry into the police department’s failed investigation; and the families’ search for answers in the largest serial murder case in Canadian history. 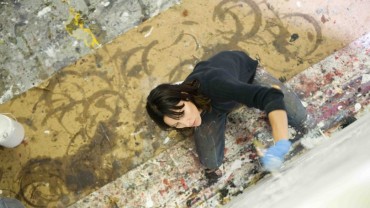 This is a powerful documentary that poses many questions: What is art versus exploitation? And, what is society’s role in continued systematic violence? Salem Film Fest Writer Sarah Wolfe caught up with Director Damon Vignale  ahead of THE EXHIBITION’s East Coast premiere at Salem Film Fest to discuss this deeply complex film.

Sarah Wolfe: You spent six years filming THE EXHIBITION. What made you tackle this story in the first place and stay with the project for so long?

Damon Vignale: When I met Pamela, she had only painted a dozen of the paintings. I was looking at some of her commercial work and couldn’t take my eyes off of the “faces” in the back of her studio. When she explained what she was doing, I had a lot of questions. Why was she painting these women? Who were they? What happened to them? How would the artwork be received? I thought it was compelling enough to document, however I never thought it would take six years in the making. When you see the film, so many things come to light throughout the course of it  ̶  which was my experience while filming it.

SW: Your film raises a lot of questions about whether “The Forgotten” is art with a message about systematic violence against women – particularly lower-class minorities ‒ or if it’s exploitation of the victims. With strong feelings in both camps, did you encounter challenges in setting up interviews? For example, communicating that the film would show many perspectives instead of just one?

DV: We did experience some challenges in getting people to speak on camera. A lot of people who were opposed to the work were suspicious of my intentions. Many declined interviews. The others who agreed only did so after we assured them that we would be fair.

SW: In the film, we see Pamela Masik at work on “The Forgotten” ‒ sometimes “reenacting” the violence these women experienced by defacing their portraits. What was it like to be in the studio with her, witnessing her intense creative process?

DV: It was just myself and a camera during most of the studio filming. I think it allowed Pamela to be natural and open with her process as an artist, which the film benefitted from. I have to admit the first time I saw red paint hit the canvas, evoking blood, it did startle me. I got a little nervous about what I was getting myself into. But that is also one of many things that made the project interesting and worth following. I grew a huge respect for Pamela and the commitment she has to her work. In the time I spent with her during the six years, she was always walking the talk as an artist. It’s 24/7 for her. Always painting.

SW: Are there any moments that particularly stand out for you working on this project?

DV: Some of the victims’ family members were visiting the farm where the women had been murdered and invited my producer and myself to come along. We did, however we never expected they would climb through the fence and walk the grounds of the crime scene. I followed them with my camera, but found it very disturbing. Yet, for the family members, it was obviously cathartic. It’s a scene in the film I get a lot of questions about.

SW: THE EXHIBITION isn’t your first work that’s involved the topic of First Nations, in this case the heritage of more than half of the missing Vancouver women. You’re also writing on the award-winning Canadian series, BLACKSTONE, which takes place on a reservation. Do you have any personal connection to First Nations?

DV: My great grandmother was First Nations, however I wasn’t raised with any Native culture. My mother’s black and my father’s white, so my family background is very mixed. My career has involved a lot of First Nations material more by happenstance or fate  ̶  whichever way you look at it.

SW: What do you hope audiences will take away from THE EXHIBITION?

DV: I hope the film starts a conversation. That was always my goal. I know people will debate the artwork, and there will be those for and those against, however if in the course of this conversation one learns a little more about the women, the dynamics behind why they were on the street, why they were vulnerable, and how we are all responsible as a society for the most vulnerable of us, then that would be a great takeaway.