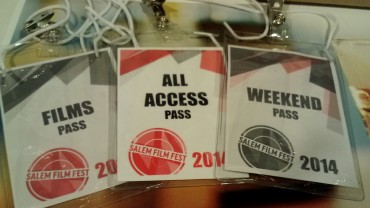 Salem Film Fest 2014 is quickly upon us (March 6-13th). With more than 35 documentaries to choose from, wouldn’t it be better to plan out which ones you’d like to see ahead of time and get your tickets before everyone else? Well, this year anyone who purchases one of our Festival Passes has the option to visit CinemaSalem ahead of the crowds to pick up tickets for the films they’d like to see at SFF2014. But hurry: this exclusive deal ends TOMORROW, Thursday, February 20!

While tickets for the general public go on sale February 21st, we have three different festival passes available for purchase right now! This includes our popular Friend of the Festival Pass, All Films Pass, and Weekend Pass. Each pass comes with great savings and unique benefits that only come from investing ahead of time, including:

FRIEND OF THE FESTIVAL-ALL ACCESS PASSES provide admission to all festival screenings and events. Purchasers also receive a Salem Film Fest t-shirt and 12 coupons, each good for a small fountain beverage and small popcorn from CinemaSalem.

NOTE: All Access Pass holders with ticket stubs also will enjoy the first opportunity (for a few moments) to take their seats before the rest of the audience is allowed into the auditorium at each screening.

The potential value of this pass is more than $440; the actual cost is $175 for adults and $165 for seniors and students.

FRIEND OF THE FESTIVAL PASSES

ALL FILM PASSES provide admission to all film presentations at the festival, in all venues. The potential value of the pass is $320; the actual cost is $120 for adults and $100 for seniors and students.

WEEKEND PASSES provide admission to all films screened at the festival on Friday, Saturday and Sunday, March 7-9. The potential value of the pass is $180; the actual cost is $100 for adults and $80 for seniors and students.

While the passes will be available all the way up until SFF 2014, the exclusive chance to get your first choice of films ends TOMORROW, THURSDAY, FEBRUARY 20! Pass holders can visit CinemaSalem from 11 am-8 pm to have their tickets printed ahead of time and assure they’ll have a seat for some of the year’s best documentaries featured at Salem Film Fest 2014!