KISS THE WATER: A Dreamlike Ode to Megan Boyd

There is a mythical quality to the story of Megan Boyd. She lived alone in a small cottage in Scotland, overlooking the North Sea, where she had no electricity, running water or telephone. There, she devoted her life to creating intricate and stunning fishing flies – made from feathers, fur and tinsel wrapped around tiny metal hooks. Among those who bought her works of art for salmon fishing was Prince Charles, whom she simply called “Charlie.”

KISS THE WATER, a haunting and magical film, dives deep into Megan Boyd’s world, blending cinematography with hand-drawn illustrations to capture the essence of a private woman who lived life on her own terms and dwelled long hours in her own creative world.

Salem Film Fest Writer Sarah Wolfe recently spoke with Director Eric Steel about the intertwining of fact and imagination in his tribute to Megan Boyd.:

Sarah Wolfe: This is such a unique and magical film. Did you know anything about Scotland or salmon fly fishing before you decided to make a documentary about Megan Boyd? If not, why did you embark on this journey?

Eric Steel: All this began with Megan’s obituary that I read in The New York Times in 2001. I had never been to Scotland, never fished, and didn’t then (and still do not) eat salmon. Also, I wasn’t a filmmaker. So there was no simple rational for why I would have decided to clip the obit and put it on the wall near my desk – where it remained for more than a decade! Perhaps it was because the words were like an invitation to a fairy tale or that I must have a certain fascination with people living, or choosing to live, on the edge of life. But on some level I was just ready, after all those years of looking at the words, to make a journey into her world.

SW: Were there any moments where you felt a strong sense of Megan while you retraced her footsteps through her abandoned house and property and heard the stories?

ES: After I flew to Glasgow and drove many hours north through the Scottish Highlands, I began to have this terrible dread that I was just too late – that there wouldn’t be any trace of Megan Boyd left. If we hadn’t known precisely where we were going, we would have driven right past her cottage. It had been completely obscured, almost swallowed by, trees and shrubs that had not been trimmed in years. When I pushed in the door (rotted and unlocked), pigeons and rodents made a mad dash to escape. I suppose I felt Megan’s presence most when I looked out her window…The stretch of beach outside was at once incredibly romantic and desolate. 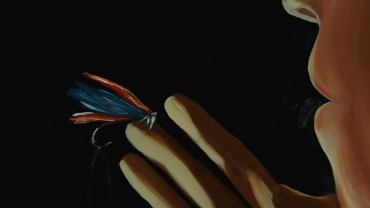 SW: What inspired you to blend your documentary with fantasy – represented by animated hand-painted images?

ES: I have a Rouchian sense of truth in film. I understood Megan’s world to be an intertwining of what could be seen and what could only be imagined, what was surface and what was subtext.  In many ways, Megan’s life story was already a myth, or at least mythologized in fishing lore – so her dream world, as I imagined it, was almost more real, if that makes sense.

SW: The blend of footage of the sparse Scottish coast, illustrations and music has a haunting, lyrical quality. Had you ever collaborated before with illustrator Em Cooper or composer Paul Cantelon?

ES: I had not collaborated with either Em or Paul. I felt a little bit like Goldilocks when it came to animators and composers. We tried to work with two animation teams and two composers before finally finding our way to Em and Paul – both of whom were just right! What I loved most about Em, along with the way she paints, is that she really did set out to become Megan Boyd, as a character in a dreamscape. And I was introduced to Paul by a dear friend who re-appeared magically in my life just when I needed her – and told me not to worry, she knew just the right composer (even though she had not seen a frame of footage!) Paul’s wife, Angela McCluskey, it turns out is Scottish and it’s her vocals you hear at various moments in the score.

SW: Have the film’s participants seen the finished work yet? If so, what’s been the overall reaction to your approach to Megan’s story?

ES: We actually arranged a screening in Helmsdale in January where so many of the people from the film, and a good portion of the towns of Helmsdale and Brora, were able to see the film on the big screen! I was lucky enough to be connected by Skype for a Q&A afterwards – which was a great treat. They loved Megan, in their own way, and I think they really love this film ‒ especially the magic of it.

SW: Several interviewees said her ties were for fishing, not for framing. Still, do you know if they’re on display anywhere to show her remarkable gift?

ES: There are actually several of Megan’s flies in the American Museum of Fly Fishing in Manchester, VT!

SW: Has Megan Boyd taught you anything that you can apply to your own life?

ES: I am quite sure that I make films that allow me to catch glimpses of myself beneath the surface.