“I’m completely shocked [by receiving this award] and thankful for this honor,” Grant said.

AWFJ Founder & President Jennifer Merin was on hand Thursday evening to present the award to Grant following the New England premiere of A FRAGILE TRUST, for her film about former New York Times reporter and serial plagiarist Jayson Blair.

“[The AWFJ] are all journalists, and we feel this film is a remarkably good example of how a director can use a character-driven story to explore a much greater issue,” Merin said. 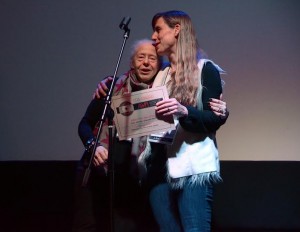 A FRAGILE TRUST tells the story of Blair, the most infamous plagiarist in modern journalism history, and the scandal that nearly brought down The New York Times. Grant, a filmmaker and lecturer of visual journalism at University of California – Berkeley, spent seven years producing the film, which is notable for its revealing interviews with former NY Times executive editor Howell Raines and Blair himself. The documentary is also an exploration of the institution of modern journalism, the overwhelming pressures reporters face nowadays, and the ethics behind news reporting.

“I want people to leave the theater talking about journalism,” Grant said.

A FRAGILE TRUST was the official opening film of Salem Film Fest 2014, which features more than thirty feature-length documentaries in downtown Salem, MA from March 6-13. Grant’s EDA Award marks the first of several awards that will be presented to selected films during this year’s SFF, including SFF Jury Award, SFF Audience Award, AMERICAN CINEMATOGRAPHER Award for Best Cinematography, and – for the first time this year – The Michael J. Sullivan FRONTLINE Award for Journalism in a Documentary Film.

The EDAs are named in honor of Merin’s mother, Eda Reiss Merin, a stage, film and television actress whose career spanned more than 60 years. This is the third year AWFJ – an organization that supports cinematic work by and about women – has presented EDA Awards to films featured at Salem Film Fest directed and/or produced by women.

This article has been corrected from a previous version.