Staring out the window at the newly arrived snow, you’re probably thinking what we are: Really? More snow?

But then, if you’re anything like us, you’re reminded of one of the best running jokes from Bill Watterson’s classic comic strip Calvin and Hobbes: Calvin’s snowmen.

For those who don’t know, Calvin – the precocious six-year-old whose best friend is a stuffed tiger named Hobbes – had a habit of making snowmen that were a bit different from the other kids’ sculptures. Some looked like monsters, others were about to undergo brain surgery, while others stood outside his parents’ house protesting Calvin’s mom’s choice of dinner. For fans of the strip, it’s one of many priceless takeaways from Watterson’s timeless creation.

Then the thought hit us: DEAR MR. WATTERSON, Director Joel Schroeder’s loving look at the power of Calvin and Hobbes and Watterson’s legacy, is featured at this year’s Salem Film Fest. So, in conjunction with the premiere of DEAR MR. WATTERSON (and a fun way to spend another snow day), SFF is laying down THE SNOWMAN CHALLENGE: make your own Calvin-style snowman and you could win a free ticket to the showing of DEAR MR. WATTERSON at SFF 2014, Sunday March 9. 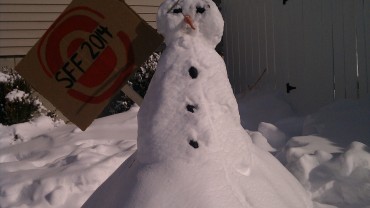 How to enter THE SNOWMAN CHALLENGE:

SFF organizers and volunteers will vote on their favorite snowman. The official winner will be announced March 6th. Good luck!