Filmmaker Spotlight–Catching up with Andrew Shea 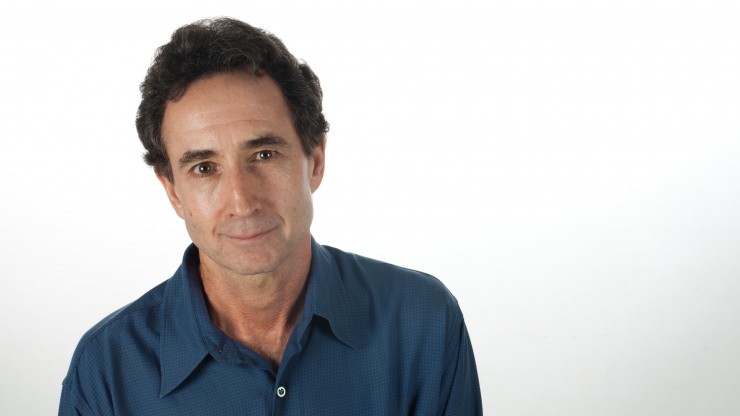 This year we have a new film by Salem Film Fest alum Andrew Shea, director of PORTRAIT OF WALLY, which screened in 2013. This year, we will be screening his new film, WRESTLING ALLIGATORS, which focuses on James Billie, once Chairman of the Seminole Tribe of Florida, as well as a musician, soldier, and yes, alligator wrestler. Engaging, thought-provoking, informative, and entertaining, WRESTLING ALLIGATORS is a film that effortlessly handles the complexity of its subject. I had a chance to talk to Andrew about his life outside of filmmaking and ask him to predict the future (which he did).

KCS: What do you do professionally outside of filmmaking?

AS: I’m a professor at the University of Texas at Austin in the Department of Radio, Television and Film. I’m also the associate chair here. I teach directing and film production classes, and I help administer the production and screen-writing side of the department.

KCS: I was doing a little research on you, and I noticed that you have a pretty diverse background. You’ve done theater and you’ve done some feature narrative films along with your documentary films. Can you talk about your early influences and how you became interested in performing arts and filmmaking?

AS: Yeah, I was interested in theater from really a very young age and was acting in the plays when I was a student in middle school and then high school. When I got to college I just immediately began taking acting and directing classes, and that was my main focus in my college years. Really my goal was to be a theater director and beyond that even, my dream was to start a regional professional theater somewhere, and I eventually had the opportunity to do that after a bit of a detour to law school for three years. I founded and for eight years served as the artistic director of a regional professional theatre company in New Mexico, but eventually I segued into filmmaking.

I’m not quite sure what inspired me. There wasn’t one thing. I think I felt like eventually I was going to want to have that opportunity to have a broader audience for my work, so I moved into filmmaking. But yes, my first three films were all narrative films and then about 10 years ago I began moving toward documentary, and it wasn’t part of a master plan. It was just that a really great story presented itself to me, PORTRAIT OF WALLY. I just felt like it suited my background and my understanding of the law, because I do have a law degree. And I just have continued making documentaries for the last couple of years, although I fully intend to return to fiction. My next project actually, I think will be a fiction film.

KCS: So is that something you’ve already started work on in terms of writing a script et cetera?

AS: It’s actually a play that a friend of mine in Los Angeles has written. He’s a very talented actor and writer and I’ve known him for many many years. He actually acted in a play for me in New Mexico in the 80s and he’s written a play that I really love. He’s going to adapt it into a screenplay. So we’re just starting work on that project now.

KCS: I’m curious to know a little bit about your personal taste in film. Would you be willing to hazard a guess as to what film might win best picture this year, or tell us about any great documentaries you’ve seen this year that we ought to run out and see right away?

AS: You know, I’ve been watching more fiction films that documentaries right now because I get the DGA [Directors Guild of America] screeners. Because I’ve got young kids we don’t get out to the movies that much, so most of the movies I watch this time of year are DVDs sent to me by the DGA. I don’t know which film is going to win Best Picture, but I loved MANCHESTER BY THE SEA. I did think that was a great, great film. That’s close to home for you there in Massachusetts. I think MOONLIGHT is an extremely strong film also. I’d bet on one of those, but I’m not a wizard by any means. I don’t have a crystal ball, but I do think that they’re both remarkable. So that would be my take on that.

There are so many good documentaries out there right now, but I’m way behind. I finally watched WEINER not that long ago, and I was particularly interested in it because I’m making at the moment a pure vérité film about Buzz Bissinger. I was just interested in the filmmaking approach that the WEINER filmmaker’s had taken. I’m a native New Yorker too, so the story was, I thought, extremely well-done.

KCS: I haven’t actually seen WEINER yet. I’ll have to get on that.

AS: Like a lot of successful vérité stories, filmmakers just happened to be there when things developed between Weiner and his wife and also between Weiner and the New York voting community in a very unexpected way. They were expecting the film to be about his comeback when he ran for mayor of New York, but they weren’t expecting it so much to be about the final nail in the coffin of his marriage when yet another episode of his sexting was uncovered in the New York tabloids. From a filmmaking standpoint, they were in the right place at the right time.

KCS: It does seem that a lot of great documentaries benefit from a stroke of luck. As you said—being in the right place at the right time.

AS: The vérité stories do. But in my personal experience, you just need to be willing to wait and to be there. And eventually those moments or that moment will happen. With PORTRAIT OF WALLY, my last film, that was really about the settlement of the case and the unpacking of the painting itself in this federal warehouse in Queens. We knew that we needed to wait until something broke in the story like that. But that wasn’t as much of a vérité film as WEINER or my new documentary about Bissinger.

KCS: I think a lot of our viewership will remember PORTRAIT OF WALLY. We showed that in 2013 I believe.

KCS: Yeah, from Texas it’s a long journey. Well, you know you’re making movies, so maybe we’ll be able to get you out here in the future.

KCS: Well, we’ll keep up with you and follow how BUZZED is going.

AS: That’s at least another year from being finished but it will be done eventually. I’ll let you know.

KCS: Alright that sounds good. I have just one final question I ask pretty frequently to satisfy my own curiosity and film voyeurism. If you were stuck on a deserted island for the rest of your life, and you only had three films to watch, what would you choose?

AS: [Laughs] You mean other than my own films? Oh gosh, you know, probably DR STRANGELOVE would be one of them, maybe CASABLANCA. I can’t think off hand what that third film would be. I’m just gonna stick with those two. You know, I’ll tell you what, I’ll say CHINATOWN as my third film.

KCS: That’s a pretty good list of heavy-hitters, so I think you’ll be all set.

AS: That dates me obviously as someone whose taste was frozen in the 60s and 70s. Be that as it may, those are my choices.

This is a good time to note that MOONLIGHT won best picture, so it’s possible Andrew is more wizard than he’s letting on. I did talk to Andrew about WRESTLING ALLIGATORS, but that bit of the conversation had a lot of spoilers, so it will be posted after the film has screened. Be sure to check back here after you watch it! WRESTLING ALLIGATORS screens Friday, March 3rd at 2:30, at PEM, Morse Auditorium.