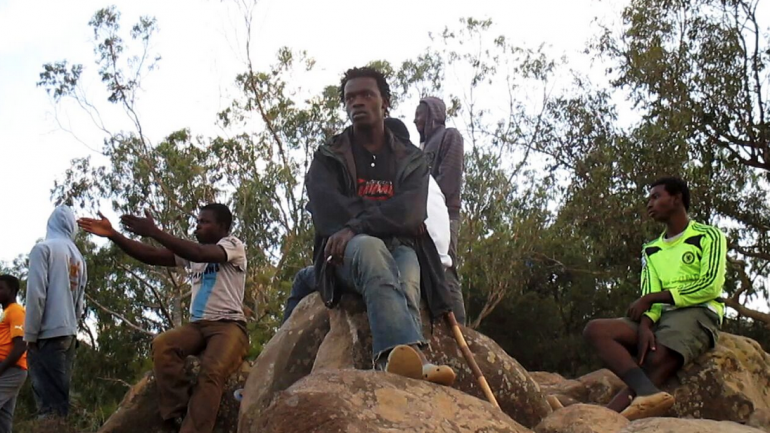 LES SAUTEURS (THOSE WHO JUMP)

In LES SAUTEURS (THOSE WHO JUMP), over one thousand African migrants live in a makeshift camp in the forest overlooking Melilla, from where they repeatedly try to jump the high-security border fences that separate Africa from Europe. When filmmakers hand a camera over to Malian emigrant, Abou Bakar Sidibé, and step away, the result is a uniquely authentic inside look at a parallel world.

Salem Film Fest program director Jeff Schmidt caught up with Estephan Wagner, one of the co-directors of the film and the editor.

JS: LES SAUTEURS (THOSE WHO JUMP) is rather timely and quite unique in its vantage point regarding the difficulties faced by refugees, how did the film come about?

EW: In 2014, Moritz and I read a lot about the situation in Melilla, where THOSE WHO JUMP takes place.  We were really emotionally touched.  On the the one hand shocked by the border itself, the institutionalized violence that lies in this border that we actually all pay for with our taxes in Europe.  On the other hand we were really impressed by the strength and the resilience of these young men on the other side of the border, that even when people die or get badly injured – it looks like they just clench their teeth and keep on trying again and again and again.  That for us really deserved some sort of recognition and we felt the urge to make a film about them. 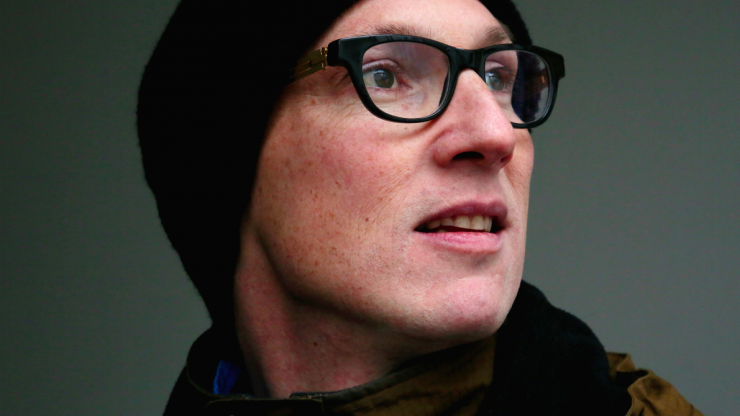 We very quickly realized that there are many films out there about refugees and also at this very place there have been films before, so we were wondering what we could add to the theme, to the place and even more so to filmmaking by doing this film.  We discussed that the discourse about refugees always seemed to be the same, which was out of a position of power – we were talking about them.  In the best of the cases, we were talking with them.  But very rarely, if ever, were they talking to us.  So we decided to give away power, to engage in, let’s say, a game of empowerment and democratization.  We gave away the camera, decided not to shoot a single frame, to allow them – later on it became Abu –  to shoot what they felt was important.  And to shoot it in the way he wanted to shoot it, and to make aesthetic choices.

Later on we realized, actually by doing this, he was more than a character and the cinematographer, he was making aesthetic choices, he was making narration choices and that in our eyes made him really into a co-director.  In the course of the editing, we decided to credit him just as us, and so we have three co-directors now.  And that also has practical repercussions, we for example share all of the income, we share all of the prizes and any prize money, and we are very happy that we made that choice.

JS: As a filmmaker, the experimental, almost found footage-like nature of the film must have been both a challenge and quite a rewarding experience as an editor, once you were able to figure out how to tell the story.

EW: Yes!!  I’m one of the three directors but I am the film’s sole editor. It was a challenge, obviously it was – the footage was fragmented, there were great things about the footage about the intuitiveness of the footage and the intimacy – but there were big challenges.  It was very fragmented, very often scenes would not have a beginning or not have an end or the camera would pan away as something important was happening.  There was very little coverage of scenes as you might expect, so there was a lot of work to be done there.  At the same time, I reminded myself that the very strength of the footage was in this amateur like, found footage like quality and I always wanted to find the balance between how you shape scenes in a way that they work, but also how do you keep this strength and authenticity that they have so that it gets transmitted to the audience.  I think we achieved that very well. 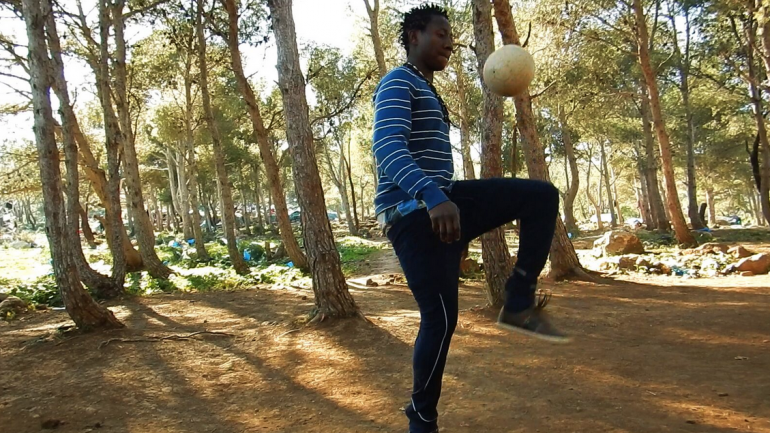 LES SAUTEURS (THOSE WHO JUMP)

JS: What was your workflow process with Abou Bakar Sidibé, who not only serves as our guide, but also the film’s cinematographer?  I’m guessing you might have been holding your breath awaiting the first batch of footage to see if the collaboration was going to work?

EW: Actually, funnily enough no.  At the beginning we were really testing, we didn’t know that he was going to be our man.  At the beginning we gave out three cameras, but quite early on we realized that Abu was going to be the main character.  And that was partly because we got along really well with him, which was very crucial, there was an element of mutual trust, but also in his footage there was something special, there was some sort of sensitivity that transcended his lack of experience.  Obviously he had no training whatsoever as a cinematographer or filmmaker, so the images he shot at the beginning were vertical, like shooting with your mobile phone.  So we had to start from scratch really.  But on the other hand he had something authentic he brought to it and he had a joy in filming, which developed really into a love for filming, which is part of the film now, this process of falling in love with it.  But as the project evolved we didn’t really hold our breath each time, we knew we were either going there to pick up images or someone from Malia, a fixer, was going to send us images.  Those were really enormously tense and beautiful moments, as we were sitting in our nice cozy editing room and these folders would be slowly ticking in through the internet.  It felt like being a small child on Christmas eve and you had to wait for the moment where you could unwrap presents.  We were not present during the shooting, that was one of our rules, as we didn’t want to interfere.  Very often we didn’t know what to expect and we wouldn’t understand the images that were coming in,  we would need to watch 10,15-20 clips until we finally realized, “oh wait a second, they are hiding, right” or that the police were raiding the camp, so they were really strong scenes that unfolded in this very bizarre way in front of our eyes.

EW: Humanity, in all of its ups and downs, and pros and cons, humanity/real life is what motivates me.  I’ve never been interested in making fiction films, though I like fiction films, I watch them, but I think my time is much too precious to invent stories when life is so full of incredibly, strong, beautiful and important stories. Humanity inspires me.

EW: It’s about inspiring people and diversifying our social conversation.  We seem to get more and more trapped in these small facebook-like groups, where everybody is thinking the same way as we do and then there are those out there that think differently and that are almost our enemies.  For them, it’s obviously the same way.  Documentary films I think can go beyond those closed circles and open up our minds and bring nuances into this very complex world.  As filmmakers, I really think we have a responsibility there, to go beyond the easy elements of entertainment – not that entertainment is bad, it’s something good to have in your films as it can help audiences engage, but it can’t be the goal, it has  to be a means to get your goal out there.  I hope that documentary films can impregnate our society and help us to live a tiny bit more aware.

LES SAUTEURS (THOSE WHO JUMP) screens on Monday, March 6 at 6pm at CinemaSalem – tickets available for purchase at the CinemaSalem Box Office or online here:  http://salemfilmfest.com/2017/films/les-sauteurs-those-who-jump/