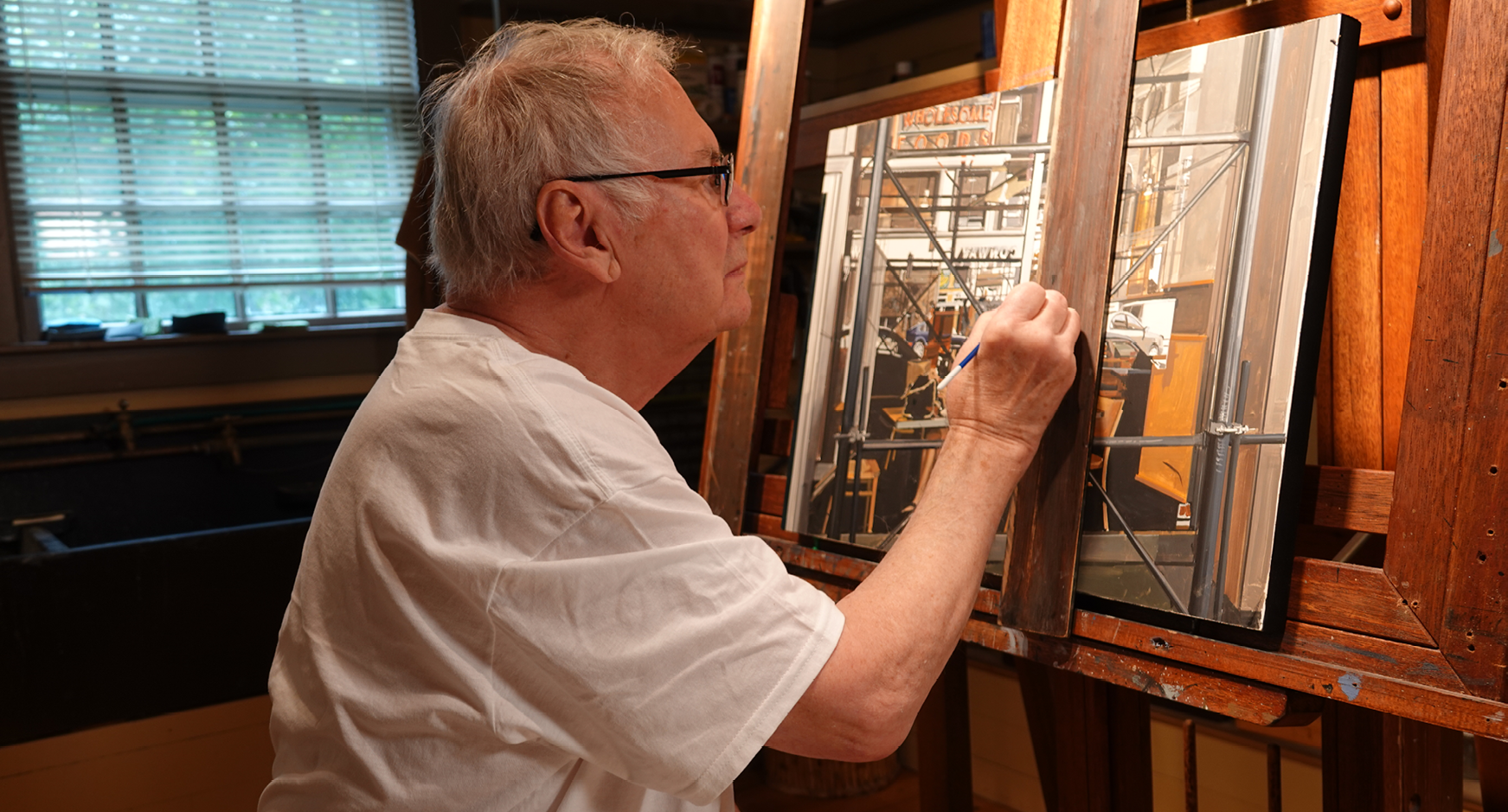 Richard Estes has been called the “father of photorealism” due to his hyperrealistic paintings. He has humbly avoided media attention over his long career, yet is admired by artists ranging from Salvador Dali to Chuck Close. ACTUALLY, ICONIC: RICHARD ESTES invites viewers into Estes’ world with unprecedented access to the artist and his masterpieces. Through detailed discussions of his technique and inspirations and interviews with leading curators and critics, this delicate portrait does more than just explore Estes’ pioneering genius—it humanizes it. 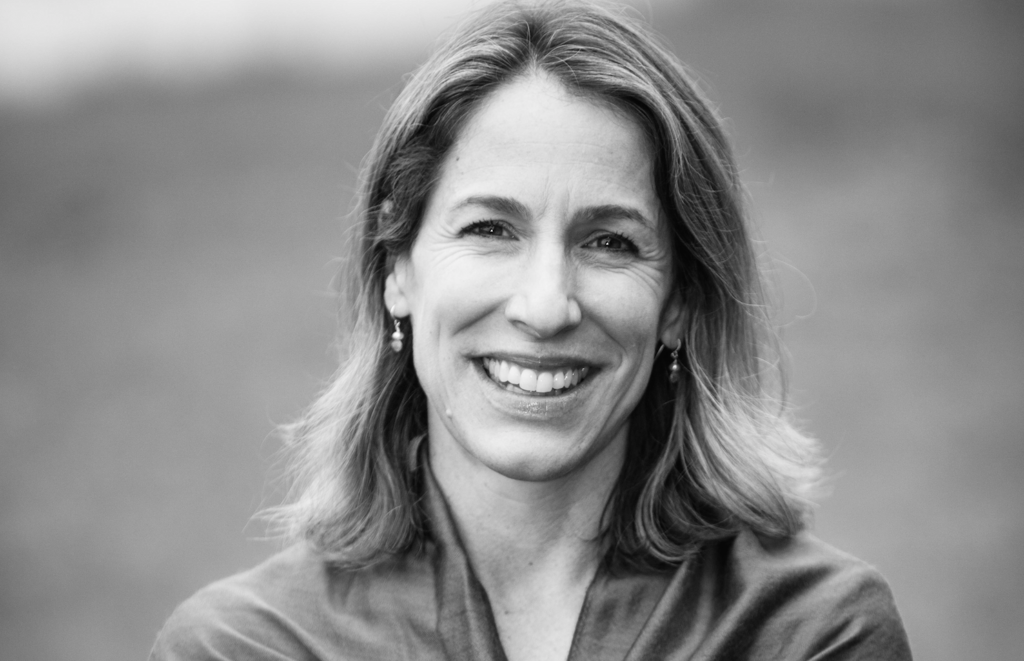 Jeff Schmidt: Our audience might remember your last film that screened at SFF 2016, CURIOUS WORLDS: THE ART AND IMAGINATION OF DAVID BECK – can you tell us about your background and how it has led you to focus on artists as the subjects for your films?

Olympia Stone:  I make intimate films that profile singular artists people might otherwise never know about. I believe I have a unique viewpoint and access because of the environment I grew up in.

My father owned an art gallery in New York City but, more than that, he was obsessed with and consumed by art. The home I grew up in was like a cross between a warehouse and a museum.  It was crammed floor to ceiling with all kinds of art – Congo nail fetishes, pre-Columbian artifacts, folk art, and all kinds of classical and contemporary western art, from sculpture to abstract expressionist paintings. It is really almost impossible to convey how much stuff there was—I was 12 years old before I realized that there were 2 fireplaces in our living room! The house was the greatest place for hide and seek, and also the scariest place to be a child at night.

Needless to say, this early exposure to all manner of art and objects stamped me with an appreciation and interest for not only art, but for people with obsessions—like my father and the artists he so admired. What does art bring to our lives? Why did my father feel the need to collect art the way he did? Why do artists feel so driven to create? What drives obsessed people to do what they do? The desire to answer these kinds of questions motivates me to make the films I make. 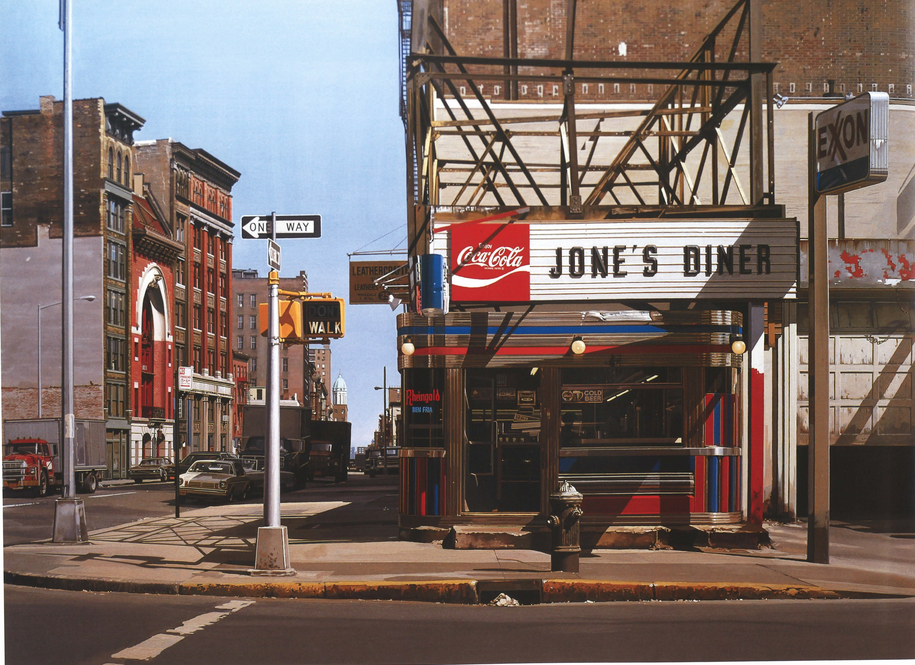 JS: How did you first meet Richard Estes?

OS: My father was Richard Estes’ art dealer for many years, and Richard had his first show at my father’s gallery in 1968 before I was born. I “met” Richard probably when I was a baby, but my earliest memories of him are from when I was around 6 years old. Richard and his partner, Jose, lived in Maine where my family would go in the summer. They would have these wild dinner parties with lots of music and dancing and delicious food, and as a kid, I remember being quite dazzled by them. Jose was a great dancer and definitely the life of the party, and Richard was quiet and shy but always extremely kind to me.

JS: What was it about Richard that convinced you to make a film about him?

OS: First of all, Richard has not received the recognition he deserves.  As one of the founders of the photorealist movement, he has had a huge impact over his long career (Richard is 88) but he has never been given a retrospective by a major NYC museum.  I think this is pretty outrageous. His work is so compelling that I wanted to help provide him the spotlight I believe he’s entitled to. Secondly, Richard is such a lovely person and is so humble that on a personal level, I was drawn to him as a film subject. 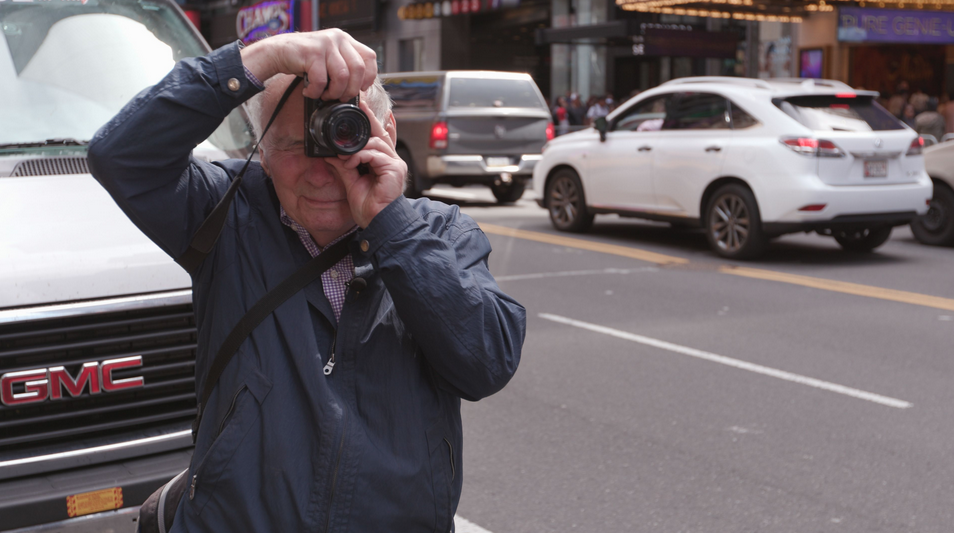 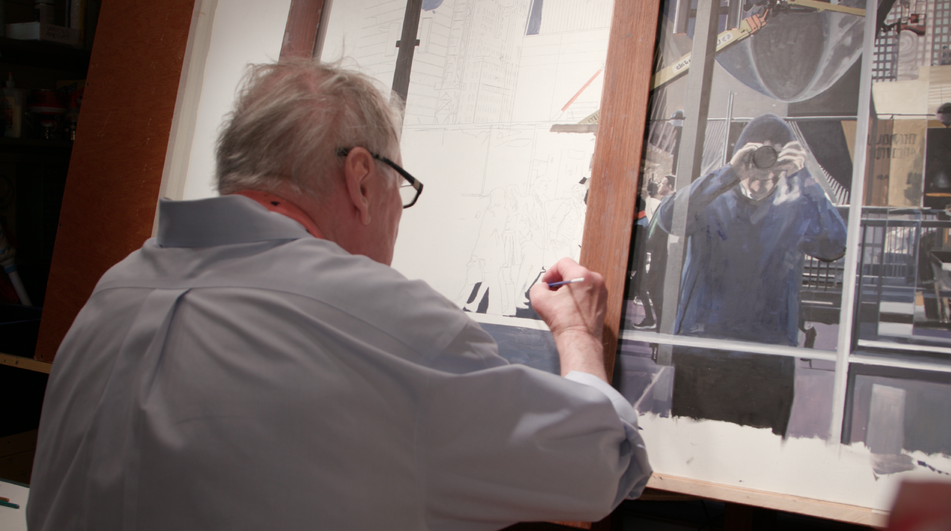 JS:  What was it like observing Richard in the studio?  His attention to fine detail in his paintings is quite striking and must be extremely time consuming to create.

OS: Richard is a private person and that extends to his painting. It took some coaxing for him to allow us to film him painting. As a result, I didn’t spend hours and hours of time watching him paint. Still, what I was able to observe was how painstaking the process was and the many steps required (and redos) to get to a completed painting. I was also struck by Richard saying that it doesn’t get any easier to paint as you get older–that he still struggles with the lights and darks, and has his share of bad days in the studio. Perhaps somewhat perversely, I find that to be inspiring–the dedication to the work despite the struggle, day in and day out.

JS: What has Richard’s reaction been to the film?

OS: As you can imagine, I was quite nervous about showing him the film but he was happy with it. His friends also told me that they felt that I was able to show the “real Richard” and that was gratifying to hear. 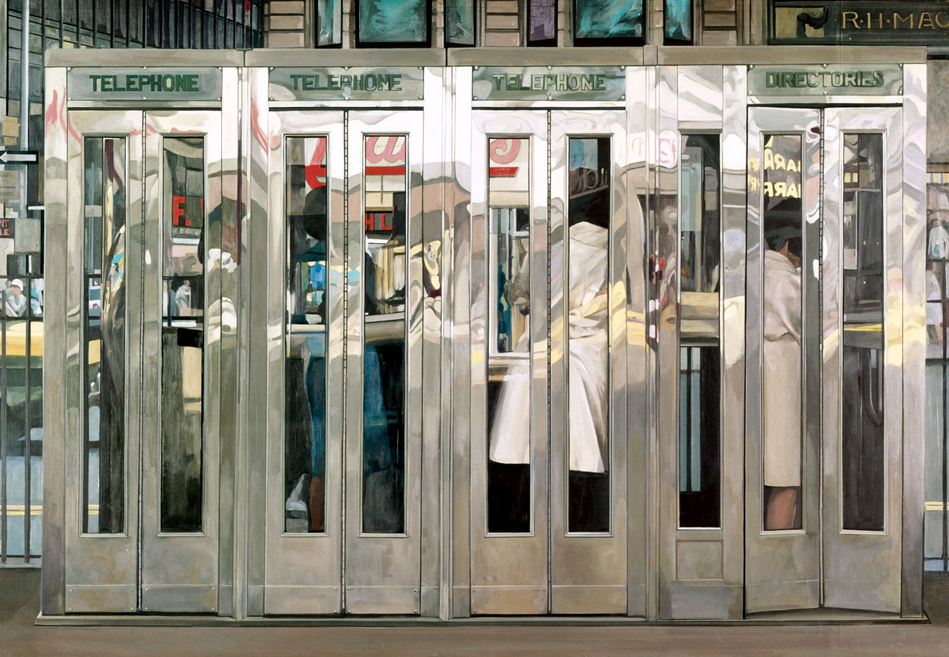 JS: What do you hope audiences will take away from your film?

OS: Most of all, I hope people will be in awe of the beauty of his work, and how many incredible paintings he has made over the course of his career. And I hope that people will be as inspired by Richard’s talents as I am! 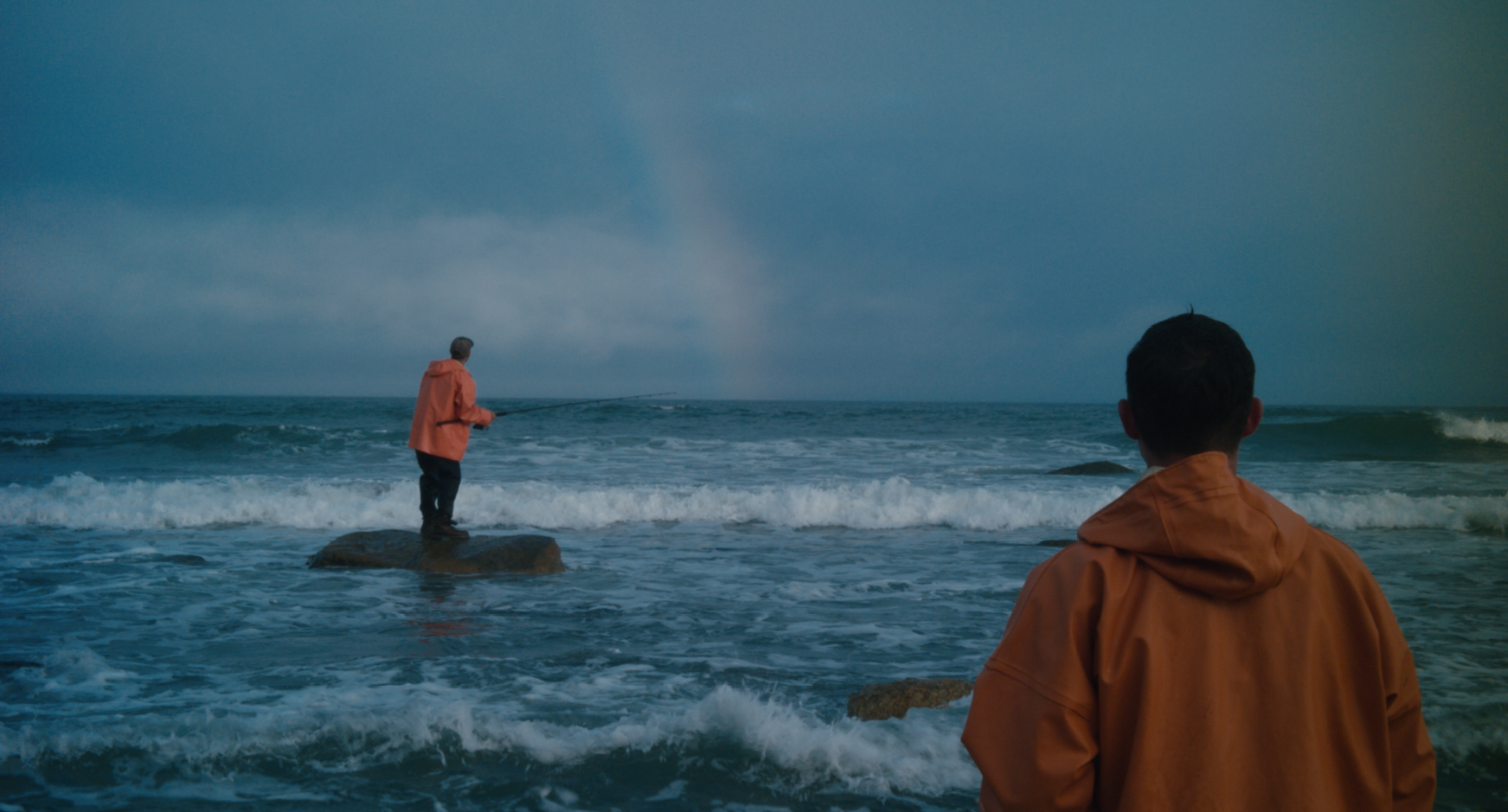 Twenty years after a beloved local fisherman, Richie Madeiras, goes missing off the shores of Martha’s Vineyard, a...

Each year we partner with Stephen Pizzello, Editor-in-Chief and Publisher of American Cinematographer to present the award...